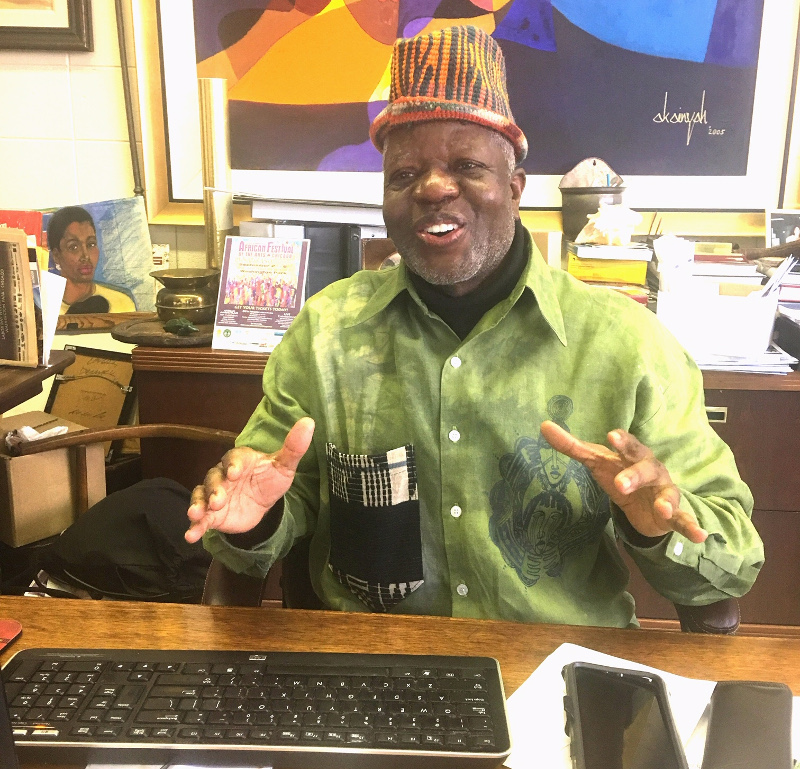 Meet Patrick “Saingbey” Woodtor. In 1989, Patrick and his late Wife, Dr. Delores “Dee” Parmer Woodtor, co-founded the African Festival of the Arts (AFA) in Chicago. In 1995, he began his tenure as the head of the not-for-profit Africa International House USA, Inc.Patrick is also the executive producer of the AFA. He earned a Bachelor of Arts in economic from the University of Liberia and a Master’s degree in transportation (MST) from Northwestern University (NWU) in Evanston, Chicago. Patrick was born and raised in Sanoyea Kingdom, the village of Kpotolomah which is location in the middle of the forest in Bong County, Liberia. His village had no road and he first saw an automobile at the age of 9.

“In 1976, I came to Chicago to persuade my master at Northwestern University (NWU). After graduating in 1979, I returned to Liberia with Dee, my wife, who I had met while we were studying at NWU. While in Liberia, a coup d’état occurred, and we’re forced to leave the country and returned to Chicago in 1982.”

“Despite graduating with a master’s degree from NWU, I couldn’t find a job. That year, the unemployment rate stood at its recession peak of about 11.0%. To provide for my family, I became a street vendor which exposed me to the benefits and positive aspects of the underground economic. The underground economic is different from the illegal economy. This experience eventually led to the opening of a brick-and-mortar shop, “Windows to Africa,” which was in Harper’s Court in Hyde Park. Unintentionally, Windows to Africa also became an African culture center, which led to the formation of the African Festival of the Arts.”

“I was attached to Hyde Park because of its multicultural and a diverse cultural landscape. As a business owner at the time, Hyde Park didn’t just represent diversity, it was also a means by which my business bloomed. Because of Hyde Park, I was able to meet the right movers and shakers, including academia, students, celebrities, and foreign influencers who supported, one way or another, in the growth of my business.”

“Among other things, I’m most proud of the annual African Festival of the Arts (AFA) which started in Hyde Park. The Hyde Park community has been very supportive from day one. AFA has become one of the largest African events in the world. Due to its prominence and what it represents, the name and concept of the “African Festival” has been copied in most cities with large black population.

“2019 marks the 30th anniversary of the annual AFA and we are calling on the community to help and make this our best year. We’re also looking to businesses in the community to sponsor events. The festival draws over 200,000 attendees from across the globe to Chicago for the four-day Labor Day weekend celebration of the African Diaspora which starts from August 31, 2019 – September 3, 2019.”