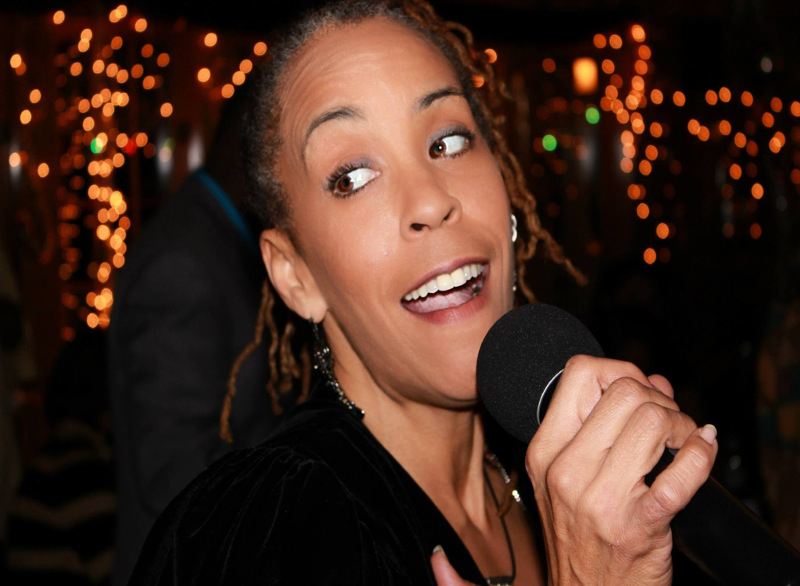 Meet Maggie Brown. Maggie is a fun, vibrant, talented and passionate performing artist, concerned with using her voice to make positive change in the world.

“I am currently working in partnership with my sister Africa Brown and we are curating and directing the Oscar Brown, Jr. Archive Project at the Logan Center for the Arts.  This has afforded us the opportunity to stage five readings of our father’s musical plays.  We have produced tribute concerts over the years since his passing in 2005.  There has been a street named after him at Harper Avenue between 52nd and 53rd Streets.  A most appropriate location as he directed and produced a stage show at the Harper Theater back in 1967 when it was a legitimate theater before becoming a movie house. We will work toward bringing his full musical productions to stage and to publish more of his writings.”

“I like most the sense of community I feel when in Hyde Park.  While currently living in the Grand Crossing neighborhood, I grew up in Hyde Park and feel connected to many people and places there.  I love being able to go to The Point and enjoy the lake or a beautiful sunrise or a huge full moon. I enjoy several restaurants and Promontory Hyde Park is one of my favorite venues.”

“I recommend Kilimanjaro boutique on 53rd Street. Mama Rose has been a staple in Hyde Park for many years and she is a champion of working to have festivals and events in Nichols Park.”

“Becoming a mother has been a high point.  Another high point is when I am performing in the Hyde Park Jazz Festival.”

“The saddest moment is when I found out my brother Oscar Brown, III was killed by a drunk driver in an automobile accident on Lake Shore Drive at about 45th street.”

“Although some people say I should step out of the shadow of my father, I find his influence is certainly the greatest in my life.  I admire and respect the writer, artist and deep thinker Oscar was. His influence is quite obvious in my own performance and career path.”

“I regret not having invested in real estate property, in spite of the fact that my Grandfather was a realtor.  Second, would be my regret for not becoming proficient at playing a musical instrument (i.e. piano or guitar).”

“I am most proud of being well thought of as a vocalist and cultural arts conservationist in Chicago. I am most proud of singing with Orbert Davis’ Chicago Jazz Philharmonic, 60-piece orchestra several times.  Also, I was vocalist for the grand opening of Promontory Hyde Park appearing with the legendary Tom Tom Washington and the South Side Big Band.”